McReynolds has been in the logistics and transportation industry for 28 years, including 21 at ArcBest. In 2010, she was named to the position of president and CEO. This was during a time when the industry and economy were recovering from the Great Recession. She took the company from a net loss of $127.5 million in 2009 to reporting an adjusted net income of $103 million as of year-end 2018. During her tenure, ArcBest revenue has increased more than 110% and employment has increased 26%. In 2016, McReynolds was elected as Chairman of the Board of ArcBest Corporation. 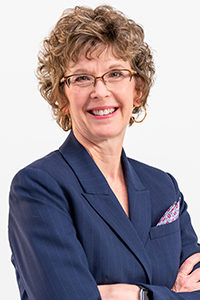 “Early on in my career, I decided I wasn’t going to make gender an issue or allow other people to do so. When I was named president and CEO in 2010, I was one of very few women in that role in the logistics industry. Our industry traditionally has a lot of male representation, although there is clearly a recent trend toward more female representation,” said McReynolds. “At ArcBest, we believe in promoting the best person for every role. As long as companies are focused on putting the best people in leadership, more of our industry’s leaders will be women.”

McReynolds serves on numerous outside boards including OGE Energy Corp., First Bank Corp., First National Bank of Fort Smith, and the Transportation Industry Council of the Federal Reserve Bank of St. Louis. She also serves on the Dean’s Executive Advisory Board of the Sam M. Walton College of Business at the University of Arkansas, the Brandon Burlsworth Foundation Board, as well as the University of Arkansas Fort Smith Foundation Board, of which she is former chair. She is the current chair of the American Transportation Research Institute board, and a member of the American Trucking Association’s Board of Directors and Executive Committee.

“Judy McReynolds has been a visible advocate for women in the trucking industry and we are so proud to honor her with this year’s ‘Distinguished Woman in Logistics Award.’  She has embraced diversity and her company’s performance is evidence of the results,” said Ellen Voie, president and CEO of WIT. “We’ve been tracking ArcBest’s success through our annual WIT Index of publicly traded companies and Judy and her team have been the leader in promoting women in both leadership roles and board seats and we applaud her accomplishments.”

The DWLA was established to promote the achievements of women employed in the North American transportation industry. It highlights the vital roles of women in the dynamic and influential field of commercial transportation and logistics. The award is sponsored by Truckstop.com and TIA.

“Truckstop.com is honored to partner with Women In Trucking to recognize the tireless commitment of all the women who keep our industry moving,” said Brent Hutto, Chief Relationship Officer at Truckstop.com. “We congratulate Judy and each of the finalists of Distinguished Woman in Logistics Award for their examples of excellence, leadership and service within our industry.”