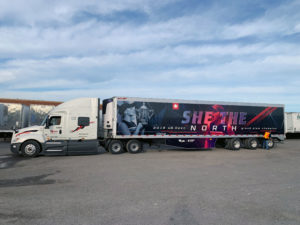 Andreescu’s recent victory inspired the project. The trailer features images of her in action as well as kissing the U.S. Open trophy and the popular “She the North” hashtag.

“We designed a wrap that represents Bianca’s dynamic style of play.” said Turbo Images Charles Veilleux, “Also, to acknowledge that she is the first Canadian to win a Grand Slam title!”

Kriska, Turbo Images and Turbo Studio are all located in Mississauga and collaborated over their shared pride of Andreescu who grew up in the city.

“We’ve had a terminal here for a few decades.” offered Kriska’s Sean LeBlanc, “Hopefully the youth in Mississauga and across the GTA that see this trailer will be inspired by Bianca’s determination and perseverance, while they pursue their own goals.”

The 53′ trailer with a full graphic wrap will be on Ontario roads as early as this weekend. It will be hauled along the 401, including the GTA.

A video documenting the design and production of the trailer can be viewed at: https://youtu.be/t9X44x7xUhA

My Recent Book Experience – Winning Online
Do You Trust Your Service Provider?