Sign In
Home /Andrea Morley, Columnists, NAL's Healthy Trucker/Thinking about cutting pop out of your diet?

Andrea is the Communications & Wellness Coordinator with Healthy Trucker and NAL Insurance. Over the past 7 years, she has created a variety of resources and programs to help drivers and office staff across the industry to improve their health. She has a Bachelor’s Degree in Human Nutrition, and is passionate about wellness and helping others reach their wellness goals. She can be reached at amorley@healthytrucker.com, and more information about Healthy Trucker can be found at www.healthytrucker.com

The number of people who still consume pop on a regular basis is staggering, especially given all we know about how harmful it can be to our health.  I’m here to present you with a challenge: cut it back, or cut it out ! I’m not here to force you to do a completely 180 degree lifestyle change, but this is one change that could drastically help you improve your health over the long term.

Pop is slowly making its way out of people’s lives, but some still enjoy indulging in at least one can of their favourite flavor per day, including many of the drivers I talk to.

But what cost does that seemingly innocent single can per day come at? For some, it can be one of the final barriers keeping them from having healthy blood sugar readings, or the one thing that’s preventing them from dropping that final 5-10 pounds. 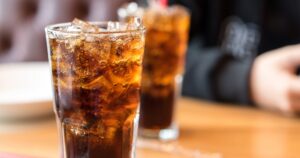 You see, it’s not what we consume on occasion that is making us unhealthy, it’s the things we consume every single day, or several times per week. It’s that unhealthy consistency that makes our bodies weaker and unable to function properly, which means that just by removing that consistent, unhealthy behavior, your health can drastically change.

So what makes pop so bad, after all? Well, between refined sugar, colour, phosphoric acid, natural flavor, and caffeine, these ingredients are all heavily processed ingredients that have the potential to harm our health, and offer little to no nutritional value (aside from that blood sugar spike). That’s right, even the “natural flavor” is unhealthy, although it’s name is deceivingly-innocent sounding.

We haven’t even talked about the sugar content, which weighs in at about 35g per can, or 9 teaspoons. Ever think about stirring 9 teaspoons of white sugar into a glass of water, adding food colouring, and drinking it? Sounds crazy when you put it that way, doesn’t it? But somehow drinking it in this form has become a norm.

I won’t get too far into the health issues that can arise from consistent pop drinking, but at the top of the list we see links between soda and obesity, blood sugar issues (contributing to diabetes), loss of bone density, tooth decay, heart disease, cancer, and several more. Diet pop is truthfully no better, as the artificial sweeteners can contribute to poor health just as much as regular pop can. It may have zero calories and no sugar, but that comes at its own cost, and isn’t something that should ever be a regular part of your diet.

Truck drivers are often tempted to purchase soda at truck stops, between the fridges lined with every flavor possible, and fast food restaurants offering it up for just a few extra cents with any meal. If you fall into this marketing trap, it’s not your fault. Just keep in mind that these companies attempting to sell you these drinks aren’t looking out for your health…only you can do that.

Ready to kick the can to the curb? Now is the time! You may wish to cut back slowly, or stop cold-turkey; either way, you’ll need to be committed and consistent. For some, they find it helpful to switch to clear pop for a couple of weeks, then to flavoured or plain soda water, then to water with fruit. For others, switching right to water works great. Drinking pop is often a habit, so you’ll want to make sure you have water on hand at all times, especially if you find yourself with some pretty intense cravings or even headaches, depending on how much pop you’ve been drinking.

Don’t let pop hold you back from getting healthier – there should be no place for it in your daily diet, so join the thousands of other drivers who have cut it out, and feel great as a result!

Andrea is the Communications & Wellness Coordinator with Healthy Trucker and NAL Insurance. Over the past 7 years, she has created a variety of resources and programs to help drivers and office staff across the industry to improve their health. She has a Bachelor’s Degree in Human Nutrition, and is passionate about wellness and helping others reach their wellness goals. She can be reached at amorley@healthytrucker.com, and more information about Healthy Trucker can be found at www.healthytrucker.com