How (NOT) to hire women by Ellen Voie

An excerpt from a 1943 transportation magazine has circulated through out the industry. It has been verified as a true reprint by Snopes, which claims that the author is L.H. Sanders, who wrote the article for Mass Transportation Magazine’s July issue. The intent was to assist (male) managers in choosing the right women to work in jobs formerly held by men who vacated their positions for military service during WWII.

Although the author seems to be patronizing women, he (or she) was probably not intending to portray females as unmotivated, incapable and fragile as the text appears. However, the eleven “helpful tips” show us how far we have come in proving our ability to work alongside men in many occupations.

First, the author suggests that married women are more responsible than unmarried women and they are “less likely to be flirtatious.” The assumption that responsibility and marriage are complementary is doubtful, as women who are single are the ones who don’t have the security of a second income.

Many of the tips concern a woman’s physical needs. “Give every girl an adequate number of rest periods during the day,” the author writes. The extra breaks allow her to wash her hands more often and apply fresh lipstick and tidy her hair so she can have more confidence and be more efficient. By allowing women to rotate to different jobs during the day, they will be happier and less nervous than staying in one position all the time.

Physical exams that focus on “female conditions” is suggested in order to avoid lawsuits, and to uncover any mental or physical weaknesses. “Husky” girls are better employees because they are more efficient and even tempered than their thinner counterparts. Keeping women happy by ensuring that their uniforms fit well is a point made by Sanders, who writes, “this point can’t be stressed too much.”

One tip for employers suggested that “older women” are inclined to be “cantankerous and fussy,” and they must be reminded to be “friendly and courteous” because of their difficulty in dealing with the public. The

author suggests that only women who have worked outside the home previously would be acceptable, since they often have a hard time “adapting themselves.” The definition of “old” isn’t included, but today this tip could be the basis for a discrimination lawsuit!

In addition to concerns about age and physical limitations, women apparently had mental and emotional issues that should be addressed! One tip was to never criticize women, as they are more sensitive than men and it would adversely affect her efficiency. Also, strong language should be avoided or it may cause female workers to “grow to dislike a place of business.”

Probably the most demeaning tips implied that women were not capable of managing themselves. The author states that the male supervisors must ensure that female workers understand the importance of time and that, “a minute or two lost here and there makes serious inroads on schedules.” Sanders writes that women need to have their schedule filled and outlined in advance so that they don’t “bother the management for instructions every few minutes.” This is due to the fact that women do not have the same initiative as men.

Although the article was written for “transit companies” and appeared in a transportation magazine, the tips appear to be for women who were working in a factory setting. Apparently it wasn’t even an option to put women behind the wheel or under the hood! Since the assumption was that women needed close supervision and lots of time for rest and to make themselves presentable, operating a big rig or working on an engine would be out of the question.

This article was written over 70 years ago and it shows how far women have advanced in the workplace. However, we still have reasons to further progress women in the transportation industry. Despite a more even ratio of women in the workforce as a whole, there are twenty male drivers for every woman behind the wheel.

We no longer have to prove that we can manage ourselves, or that we can forgo breaks to apply our lipstick, but we do need to find our footing in this industry. Women are capable, available and needed in trucking.

We’ve come a long way, but Women In Trucking Association’s goal is to advance us even further in the coming years! 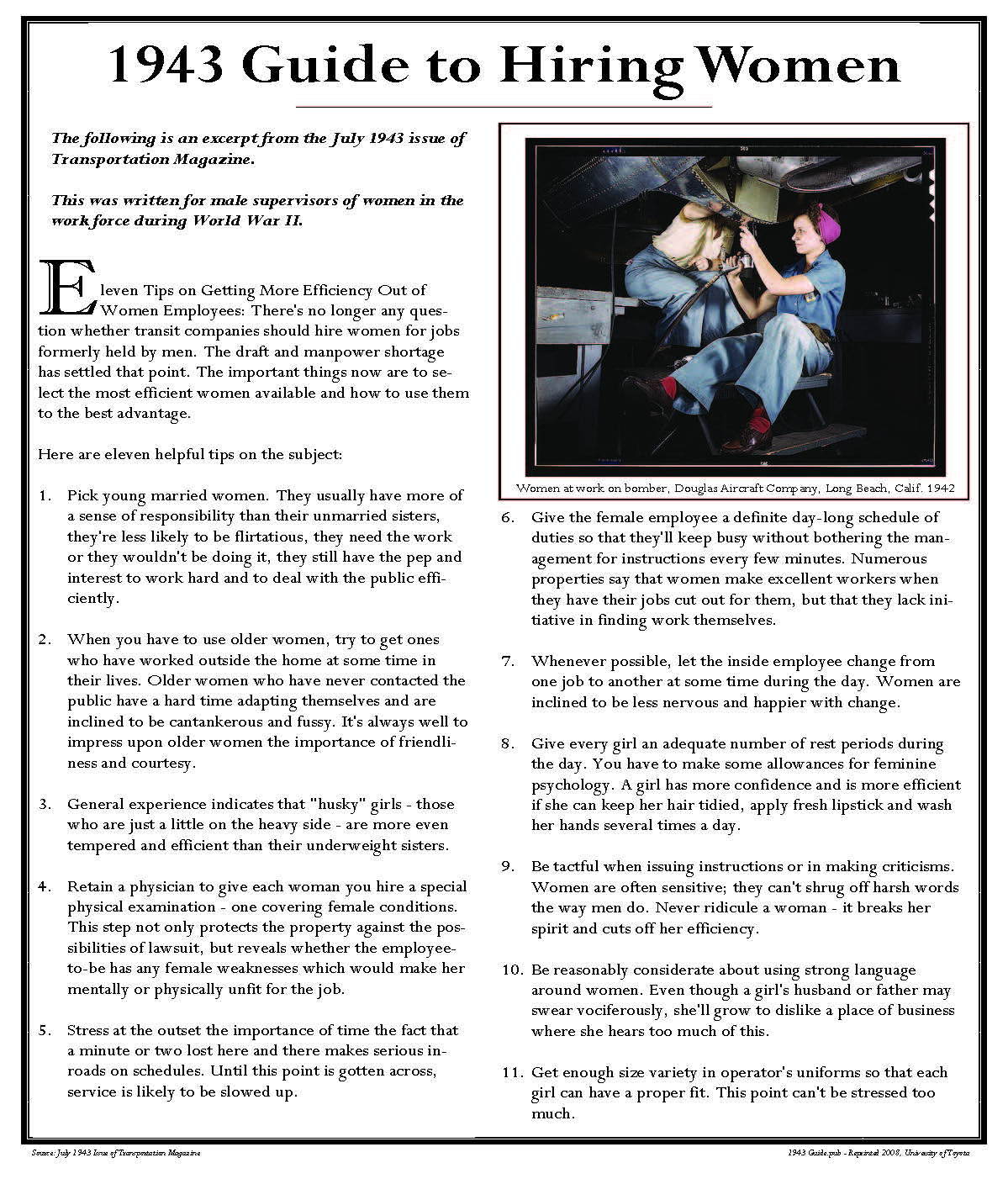