The Mission of Women In Trucking includes the goal to, “encourage the employment of women in the trucking industry.”  The idea of a mobile unit in a semi-trailer was realized in 2019 when Walmart agreed to donate a trailer to be fitted as a moving educational center.

The goal was realized when the driver ambassador program was launched.  The construction began and the trailer was fitted with touch screen monitors, videos, a timeline and a clothing display with boots, clothing and safety gear all made for women in trucking by woman owned companies.

Graphic designs were considered, and a superhero theme was the winner.  A contest to name the trailer resulted in the name WITney!

Donations started arriving, such as tires from Michelin, a donation from FedEx Freight, an automated dolly from Patriot Lift and so much more. Eventually we received donations of fuel from Pilot Flying J, truck washes from Blue Beacon, and numerous discounts from vendors.

The work was done by Bolt Custom Trucks and Manufacturing, where doors were added in the back and on the side, as well as inside the trailer.  The mobile screens were placed on the walls, cabinets added, and interior graphics applied.

The highlight of the unit is a simulator donated by Advanced Training Systems (ATS) located in the front of the trailer.  People stand in line to test their skills and get a little feel for maneuvering a tractor through traffic with a state-of-the-art simulator.

A trailer needs a tractor to pull it and Schneider offered to provide a driver with a branded truck to work for Women In Trucking Association one week per month and KellyLynn McLaughlin was hired.  She continued to driver as a training engineer at Schneider for two weeks each month, working around her duties as the driver ambassador.

It took two years to get the trailer fully wrapped with graphics and filled with the simulator, kiosks, monitors, cabinets and doors and stairs.  It is stunning.  We had a front row parking spot at the Mid-America Trucking Show in Louisville, Kentucky in March this year.  Over the three-day event there were hundreds of visitors through the trailer.  A noted attendee was (then) Deputy Administrator, Robin Hutcheson, who spent time behind the wheel of the simulator.

Earlier this year Andrea Adeyanju was hired as our Director of Driver Engagement, and she is now in charge of the driver ambassador program.  KellyLynn moved on and a new Driver Ambassador was hired.

KayLeigh McCall is a professional driver and training engineer for Schneider.  She has already attended numerous events as our driver ambassador, including the opportunity to speak at a program for Driver Appreciation Week at the Department of Transportation.

The WITney trailer (and KayLeigh) will be at the Accelerate! Conference and Expo in Dallas, Texas from November 13 to 15. We anticipate 1,500 attendees who will be able to walk through the display and learn more about careers in trucking, focusing on the professional driver role.

You can take a virtual tour of the trailer to get a small feel for the magnificence of this program, there is also a link on our website. The trailer is a rolling billboard for the Women In Trucking Association and we could not have made this a reality without the passionate supporters who provide cash, items and discounts on services.

The driver ambassador program helps us further our mission to encourage women (and men) to consider careers in trucking. 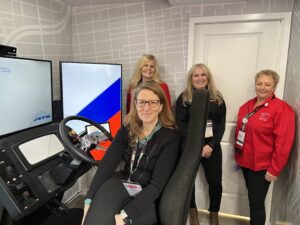